Teach your sons and daughters that women too, can be NEXT OF KINS!

As funny as this may seem, many still believe that next of kin should only be ascribed to men.

Today I had a conversation with a family going through a transition. The family consists of three women and two men. The men strongly believe that their mother’s next of kin must be a man and will not involve any of the sisters. They believed their sisters had no right to any inheritance because they are female.
Whilst this argument went on for very long, my heart kept pounding with affirmative responses. My heart was pounding because only recently did my family began to see differently. Only recently did they start believing that a young woman should raise her hands, use her voice or be a leader in public as opposed to the #SILENCE we were taught.
_____
When you teach your children values, teach them to understand that women should not be looked down on, teach them to understand that women too should be next of Kins. Reveal the “Athena Doctrine” to them and have them see the attributes that constitutes authentic leadership.
____
We must end this outdated ideologies which has kept women and men in the dark for long. Ideologies that even the perpetrators cannot clearly define or understand.

Redefining Leadership and Empowering Leaders To Do The Extraordinary 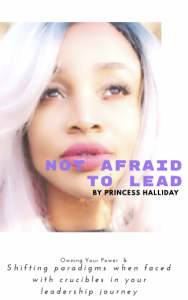